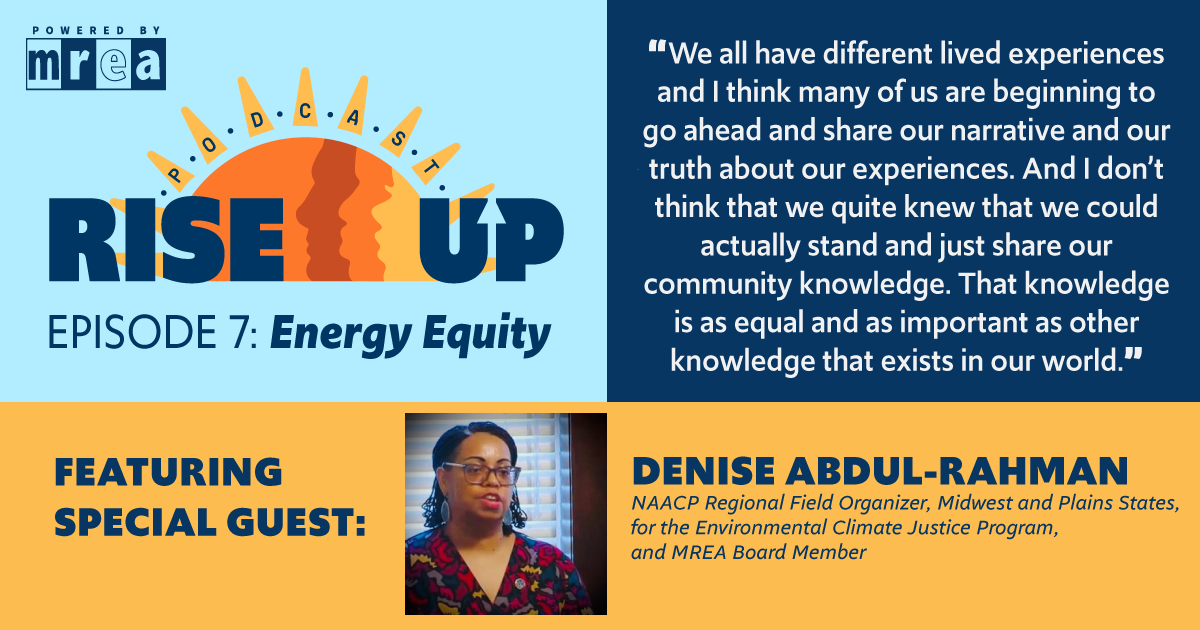 How do we achieve a more equitable energy economy? If you ask Denise Abdul-Rahman with the NAACP, she’ll kindly tell you that we need a system that increases employment opportunities and decreases pollution externalities. We need a system that creates investment opportunities for those in need instead of long-term dependencies. We need a system that prioritizes raising people out of poverty above raising profits for the few. She’ll say it starts with dialogue – listening to the communities in need and valuing community knowledge. And then she’ll ask you to re-imagine how a new clean energy economy can work for all.
Hosts:

Have you heard of the Opportunity Atlas? We’ll forgive you if you haven’t, though you probably should check it out. It’s a tool built from following 20 million U.S. children, those born between 1978 and 1983, into their mid-thirties to identify how their childhood zip code impacted their success as adults. It is likely the most ambitious and definitive study on the concept of “The American Dream.” The results are both sobering and promising:

In nearly every place in the country, children whose parents were low-income tended to have poorer-than-average outcomes as adults. But it’s also important to note that the factors that inhibit mobility are within society’s control to influence – schools, violence, incarceration, housing, job access, and quality health care are some of the reasons that zip codes and census tracts matter for life outcomes. And these factors can be improved with the appropriate investment and good policy.

With 7.8 million U.S. families falling into poverty since June alone, these conclusions hold a dire warning for the future of the U.S. economy. If we want our children and grandchildren to live in a country defined by widespread prosperity, promise, and opportunity, then we need to prioritize our investments to support communities in need. The research also makes clear that creating this future is up to us, as each of the barriers for mobility can be addressed with good public policy.

When it comes to energy policy, a focus on energy equity could underwrite a nationwide jobs and economic development resurgence. This “Just Energy Transition” is defined by the widespread deployment of energy efficiency and distributed energy resources with a priority focus on career training and re-training for underemployed individuals. This re-imagining of our energy economy will require dialogue, community conversations, stakeholder engagement, and informed policy.

Today’s guest, Denise Abdul-Rahman, helps us navigate some of these conversations. Her work as a regional field organizer with the NAACP has her focused on the just energy transition, tackling issues of energy equity in Midwest communities. Her diverse background and experience give her an informed understanding that includes human health and wellness, workforce training, social and climate policy, and advocacy. And, the budding NAACP ‘Power Up’ program is starting to show some results and help chart a path for clean energy jobs for all.

Denise Abdul-Rahman is a staff member of the National NAACP Environmental Climate Justice Program (ECJP), as the Regional Field Organizer for the Midwest and Plain States and serves as the Environmental Climate Justice Chair of the Indiana State Conference of the NAACP. She employs the program’s three objectives: Reduce Harmful Emissions, Particularly Greenhouse Gases; Advance Energy Efficiency and Clean Energy; and Strengthen Community Resistance and Livability.

Denise holds a BS in management, an MBA in healthcare management, and a health informatics designation from Indiana University School of Informatics.

Her accomplishments include organizing over 85 attendees, representing several organizations across the Midwest to the United States EPA, Region V to present the “Our Power Plan,” as well as organizing the “Just Energy” Campaign. Denise called for Indianapolis Power Light to stop burning coal by 2016 and the plant stopped February 2016, and she led a contingent that was crucial to the defeat of House Bill 1320, a bill that sought to depict a narrative that ‘solar was unfair to people of color/African Americans and therefore a fee to distribute energy across the grid should be enforced to make it fair for all. The “Just Energy’ Campaign solidified the defeat and the victory rose to national coverage with LA Times and Bloomberg News.

NAACP: Environmental and Climate Justice: Race is the number one indicator for the placement of toxic facilities in this country.

NAACP: Find Your Local Unit With over two thousand local units nationwide, it is easy to get involved with the NAACP in your community. Use the listing below and find a unit close to you.

Building the “Black to Green” Pipeline – December 11, 2020: In Evansville, Indiana, the NAACP and IBEW are training Black people for work in the clean energy industry, aiming for an equitable transition away from fossil fuels

“[African Americans] paid […] $41 billion to the energy sector, […] yet only hold 1% of the energy jobs so we really see this as a keen opportunity to infuse what we call a black-green pipeline, or to make sure that our communities are able to participate in the up and coming and inevitable green economy.”

Nearly 8 Million Americans Have Fallen into Poverty Since the Summer – Dec. 2020.

This Episode Brought to You By:

CoVantage Cares Foundation isn’t just passionate about providing great financial services, but also about supporting the Wisconsin and Michigan communities. Every year, they contribute thousands of dollars and provide hands-on support to organizations that assist residents facing financial challenges and improve the quality of life and long-term viability of our communities.